Endometriosis (Endo) is a disorder of the female reproductive system, where endometrial tissue (the normal lining of the uterus) is found in areas other than the uterus.

The most common sites are in the pelvis: the ovaries, and tissues near the uterus and fallopian tubes ( including the bladder, ligaments and bowel). 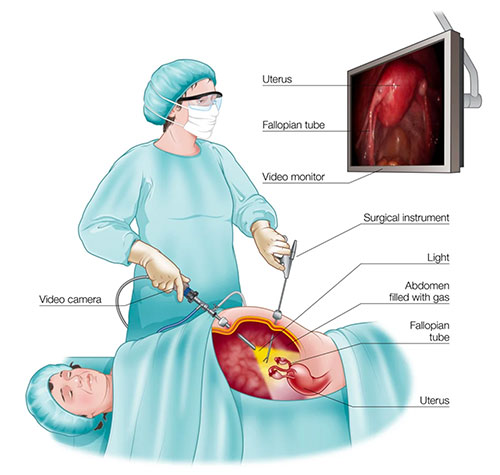 How Does Endometriosis Occur?

The exact causes of endometriosis are still not fully understood. It is believed that endometriosis occurs as a result of normal tissue from the uterus escaping into the fallopian tube and out into the pelvic area at the time of menstruation (“retrograde menstruation”). These tissue fragments are then thought to implant and grow onto the surrounding pelvic tissue and sometimes organs.

Because these fragments are made of the same tissue as the lining of the uterus, they too respond to the hormonal changes that occur during the menstrual cycle and, therefore, “bleed”.

Whereas menstrual blood can escape from the body, this has no exit and, as a result, the areas surrounding the implants of tissue become irritated or inflamed. Some of the blood and tissue may form into cysts (fluid filled lumps) – sometimes known as “chocolate” cysts, due to the colour similarity.

The continual release of blood contributes to the formation of scar tissue. If the endometriosis is severe, bands of this scarred tissue (“adhesions”) may develop.

Pain is the major symptom, though its intensity may vary. It may be experienced as a sharp stabbing pain, a constant or intermittent dull ache, or as a severe cramping pain.

This pain may be felt:

Other symptoms may include:

The presence of endometriosis may be diagnosed at the initial consultation and examination, however, a firm diagnosis can only be made when the endometriosis is actually seen, using a surgical procedure known as a laparoscopy. This enables the doctor to view the ovaries, fallopian tubes, uterus and other pelvic organs.

Effects of Endometriosis on Fertility

Why it causes infertility is unclear. For women with severe endometriosis, their fallopian tubes may be damaged so that it is impossible for the egg to reach the sperm. Other women may have “chocolate cysts” on their ovaries which impair ovulation. But even where it is mild or where the endometriosis is not found on the tubes or ovaries, women can remain infertile.

Options for treatment may include no treatment at all (if the symptoms are tolerable), drug therapy or surgery.

Drug therapy is used to suppress ovulation and therefore menstruation. Some of the drugs used are the oral contraceptive pill, progesterones (which cause a pseudo-pregnancy) and Synarel (which causes a pseudo-menopause) and Danazol (which is often the preferred choice). These drugs are not always effective.

These medications are usually taken for 6-12 months, depending on the severity of the condition. These synthetic male hormones suppress the function of the ovaries by acting on the pituitary so that hormones necessary for ovulation are not produced. By keeping a woman free of menstruation (pseudo-menopause”) the endometrial tissue does not have a chance to bleed, thus enabling the inflamed areas to heal.

Possible side effects include weight gain of 1-4 kgs, some decrease in breast size, a tendency towards acne, occasional increase in body hair, oily skin and symptoms of the menopause such as hot flushes, nausea and change in sex-drive. Symptoms should be reversible after the drug is discontinued. Long term use may result in loss of bone mineral and bone density studies are recommended if the course of Synarel treatment is longer than six months. Normal ovulation and ovarian functions should return to normal following cessation of medication.

This treatment gives some women immediate and substantial relief from symptoms. Not every woman suffers from these side effects but for others the side effects can be worse than the original symptoms.

Where more severe forms of endometriosis exist, particularly where “chocolate cyst” formation in the ovary and tubal adhesions prevent normal egg transportation, surgery is indicated to restore normal anatomy as far as possible. Surgical procedures may range from simple cautery of endometriosis spots to extensive removal of scar tissue and microsurgery. Surgical use of laser technology is also becoming more frequent.

A combination of surgical treatment and medication has been used with impressive results – up to 79% pregnancy rate in a reported series.

With thanks to the Infertility Federation of Australia Inc.

If you have questions about endometriosis, or believe you may be suffering from these symptoms, please contact Fertility North so that we can arrange for you to see one of our doctors.

We hope that this (Pre)Conception Plan will give you tools and tips for surviving this season of your life, as well as maximising your chances of conceiving.

The suggestions contained in our (Pre)Conception Plan have been compiled based on years of experience treating infertility, as well as hearing first-hand the different struggles, questions, and anxieties that our patients go through.